The beauty industry hits hard on the importance of frequent exfoliation to keep skin looking younger and healthy. Spherical plastic micro-bead scrubbers, no larger than a half millimeter, have been introduced into hundreds of skin care products in recent decades, but scientists are discovering that the ocean food web, and maybe human health, could be imperiled as a result.

As babies, skin cells are replaced every two weeks, but by age 50 the turnover rate has slowed to six weeks or longer, fostering wrinkles and other unwelcome signs of aging. Products containing plastic micro-beads profess to speed up cell rejuvenation, and their popularity signals that consumers have bought into the promise of exfoliating your way to a more youthful look. Whether or not such products deliver on this promise, scientists have discovered that these innocent-looking plastic micro-beads are insidious little transporters of chemical pollutants into lakes, streams and oceans and maybe onto our dinner plates.

Micro-beads are usually made of polyethylene (PE) or polypropylene (PP), and like other plastics, they’re thought to persist in the environment for a hundred years or more. They’re added to facial scrubs, body washes, soap bars, toothpastes and even sunscreens and designed to be washed down the drain. However, micro-beads commonly escape waste treatment plants and pollute bodies of water, because the plants aren’t designed to eliminate them or because wastewater is diverted directly to local waterways in heavier rains.

END_OF_DOCUMENT_TOKEN_TO_BE_REPLACED

A single polyester garment can shed >1900 plastic microfibers per wash

If you have already switched to an eco-friendly laundry detergent, as many people do to contribute less to water pollution, you might be surprised to learn that the pollution you generate on wash day has as much to do with the kind of fabrics your clothes, bedding and towels are made of as the detergent you wash them in. Recent studies have revealed that a single garment made of polyester can shed innumerable tiny fibers into the wash water, and those fibers are finding their way to the ocean. The pollution they cause is worsened by the fact that, like plastic materials in general, polyester attracts oily pollutants in seawater so is a vehicle for the transfer of potentially dangerous chemicals into the food web when the fibers are ingested by sea creatures.

Although we don’t usually think of polyester fabrics as plastic per se, polyester is nonetheless a plastic material synthesized from crude oil and natural gas. And, like other plastics, polyester is a long polymer chain, making it non-biodegradable in any practical human scale of time, especially in the ocean because of the cooler temperatures.

END_OF_DOCUMENT_TOKEN_TO_BE_REPLACED

This is an updated version of Fewer Toxins in Toyland that incorporates recently stalled legislation in California aimed at protecting young children from risky chemicals.

California has moved to restrict phthalate plasticizers in childcare items. Photo from http://commons.wikimedia.org/wiki/File:Geek_rubber_duck_2.jpg

This holiday season, parents shopping for children can rest just a tad easier because of a recent California law restricting the use of toxic phthalate plasticizers in toys and childcare products made of plastic. Additional legislative efforts to rein in two other classes of chemicals suspected of posing health risks to youngsters, bisphenol A and halogenated flame retardants, emerged this year in the State Senate, although neither met with success.

But, perhaps the best news is that California has enacted laws establishing a groundbreaking precautionary approach to the oversight of chemicals that should soon make such painstaking chemical-by-chemical regulation a thing of the past.

END_OF_DOCUMENT_TOKEN_TO_BE_REPLACED

Also see an update to this article, Too Fewer Toxins in Toyland, that incorporates stalled legislation in California aimed at protecting young children from risky chemicals.

California has moved to restrict use of toxic phthalate plasticizers in PVC children's toys. Photo courtesy of Center for Environmental Health and Justice.

This holiday season, parents shopping for children can rest a tad easier because of a recent California law restricting the use of toxic phthalate plasticizers in toys and childcare products made of plastic. Additional classes of chemicals suspected of posing health risks to children, bisphenol A and halogenated flame retardants, could be reined in before long too, pending the fate of two struggling state senate bills.

But, perhaps the best news of all is that California has enacted laws establishing a groundbreaking precautionary approach to the oversight of all chemicals that should soon make painstaking chemical-by-chemical regulation a thing of the past.

END_OF_DOCUMENT_TOKEN_TO_BE_REPLACED

For the nine in ten Americans who know next to nothing about nanotechnology (NT), there is little time to waste in getting up to speed because, ready or not, the ‘NT revolution’ is well underway with new nano-engineered consumer products entering the market weekly.

Another reason, as voiced by consumer protection, health, and environmental organizations, is that NT products are being sold without adequate safety testing and government oversight.

The actual number of NT products in commerce is unknown because there is no labeling or reporting requirement.  However, over 800 have been tabulated by the Project on Emerging Nanotechnologies (PEN), an online inventory of manufacturer-identified NT goods funded by the Pew Charitable Trusts.  In 2007, at least $147 billion in global manufactured goods incorporated NT, encompassing such varied products as cosmetics, clothing, food, food packaging, and dietary supplements.  PEN estimates that figure will reach $2.6 trillion by 2014.

END_OF_DOCUMENT_TOKEN_TO_BE_REPLACED 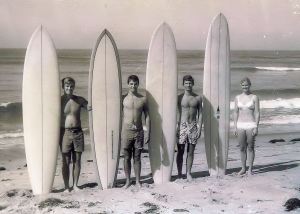 Surfing might seem like an earth-friendly sport, but a closer look reveals that the environmental impact may be more than you realize. Photo c1967 at Old Man’s Beach, San Clemente, California.

At first glance, surfing might seem like an inherently earth-friendly sport. Surfers paddle out and catch waves by sheer force of will and muscle. No need for fossil fuel-burning speed boats to get around. And, surfers have a reputation for caring about ocean pollution.

But a closer look reveals that, like most human activities, the environmental impact is far from nil and, consequently, there’s a nascent movement within the surfing industry to clean up it its act.

The Essentials
The bare necessities of surfing are surfboard, wetsuit, good waves and wheels to and fro. The waves are courtesy of Mother Nature, but the choices surfers make to otherwise outfit themselves determine the toll on the environment.

END_OF_DOCUMENT_TOKEN_TO_BE_REPLACED

Ecology of Your Cell Phone

The Ecology of Loving and Leaving Your Cell Phone
Sarah S. Mosko Ph.D. 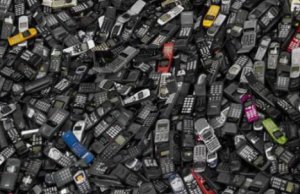 Given all the environmental costs of cell phones, certainly the most eco-friendly cell is the one you already own.

It’s not much of a stretch to liken America’s relationship with cells phones to a once sizzling romance that ends in good bye.

Fated love affairs typically begin with blind infatuation and fiery passion before reality sets in, cooling the embers enough to allow more guarded, sometimes less attractive aspects of the self to surface. Interest wanes until the love object is abandoned or replaced by an alluring new one.

Americans relate to cell phones in much the same way. An old phone, with once novel features that drew fascination, is discarded with hardly a thought when an updated model makes it seem obsolete. That consumers replace cell phones about every two years – with Californians purchasing in a single year nearly one new cell for every two state residents – makes this analogy seem less silly.